Australian Cattle Dogs (ACDs) are tough, intelligent working dogs with strength and endurance beyond most dogs their size.

ACDs were originally bred to heel and bite cattle in the rugged Australian Outback and have the forceful personalities necessary to do so. However, with the proper training and commitment the ACD can be a wonderful companion.

The many wonderful traits and aptitudes of the ACD are often the very same reasons that lead to their downfall: when families bring an adorable ACD puppy into their home with no idea of the amount of energy, determination, and intelligence in this breed.

However with the proper training and commitment, the Cattle Dog can be a wonderful, dedicated, and loving companion… for this reason, it’s extremely important that Australian Cattle Dogs be well-matched with prospective adopters.

Friendship with an ACD must often be earned, but once an ACD has befriended you, he is a friend for life. Owners often refer to ACDs as “velcro” or “shadow” dogs—wherever you go, there they are!

Because of their highly social nature, ACDs need to be with people. This is not a breed to leave chained or penned in the back yard—such isolation can lead to serious personality problems.

ACDs are often reserved with strangers, and can even be fiercely protective when they perceive that their property and/or persons are being threatened.

The ACD is an EXTREMELY active breed, with mental stimulation being of paramount importance. As SPDR’s ACD Breed Rep will attest, a bored Cattle Dog is a destructive Cattle Dog. A firm commitment must be made to exercise ACDs: they make excellent running, hiking or biking companions (although care must be taken not to over-exert a young dog while it is still in its growing stages).

The ACD is very intelligent, which can sometimes lead to other less-positive monikers such as “hard-headed and stubborn.” However this innate intelligence makes them wonderful obedience prospects (although their intelligence can sometimes be a hindrance when they outwit your expectations in advance), and excellent in dog sports such as Flyball, Agility and Frisbee competition.

ACDs are intelligent and trainable with positive methods. They have a loyal and protective nature. They form strong bonds and love to be with their people. Known as “velcro” dogs, they prefer to be wherever you are. Health is generally good and they are often long-lived.

ACDs need lots of exercise. Stimulated by motion, they often have a high prey drive and may chase kids, cats, wildlife, bikes or cars, anything that moves. They require mental stimulation and daily activities. If you don’t give them something to do, they will create their own diversions, often something you don’t want them to do. Their high intelligence can make them challenging to live with. ACDs can be possessive of yard and family, and may bite strangers if not properly trained and supervised. They absolutely need to be part of the family and can’t be relegated to the backyard. ACDs are demanding dogs that require lots of attention and can’t be ignored.

If the ACD has been socialized properly, they can be good with children: ACDs must be trained to NOT herd and nip children. Young dogs can be too exuberant and energetic for children under 6. Children need to be dog savvy and responsive to instructions by parents on proper behavior around a high energy, movement oriented herding breed. For more information, visit this website >

Many cattle dogs get along fine with other dogs, especially those of their own size and energy level. However, many can be aggressive with other dogs, and may do best as the “only” dog or with dogs of opposite sex. Many ACDs have high prey drive and are not good around cats or other small animals unless raised with them.

Energetic, athletic. Most like to play ball or Frisbee, go for hikes. Intelligent and trainable, many excel at herding, obedience and agility.

Minimal grooming required. They do have an undercoat and shed quite a bit once or twice year when they blow their coat. Need brushing during shedding season. 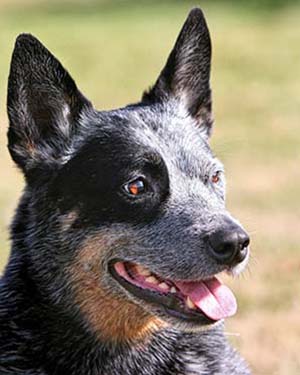 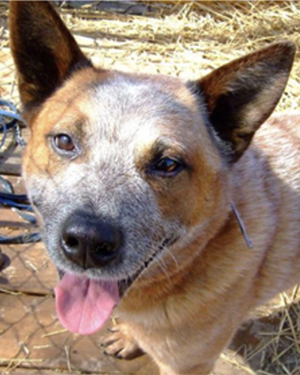 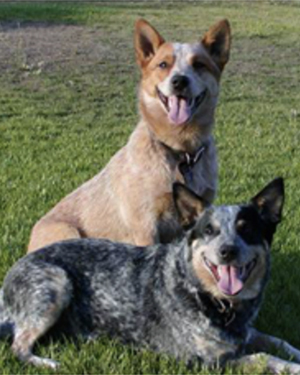 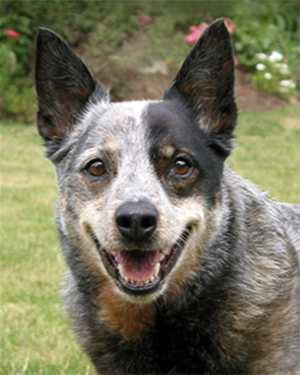 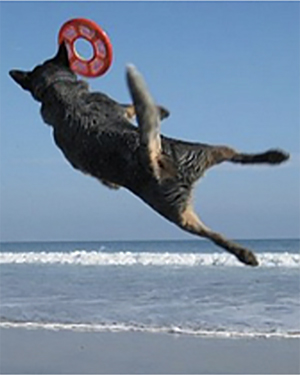