Often confused with the Cavalier King Charles Spaniel, English Toy Spaniels are known as the ultimate lap dog—proud, affectionate, and willing to please.

The English Toy Spaniel is a very old breed with origins that trace back to ancient Japan or China. When the Knight Fitz-Ralph returned from the Crusades in the 13th century, he brought with him a strain of small, beautiful spaniels from Italy that are believed to be the foundation of this breed.

Kings and queens of Europe and England enjoyed and cherished the English Toy Spaniel, with reports of them lavishing so much attention on their dogs to the neglect of more important matters.

During the Victorian Era, the breed was crossed with Asian Toys, probably Pug and Japanese Chin, and became what is known in America as the English Toy Spaniel.

The English Toy Spaniel was one of the first to be recognized by the AKC, back in 1886. Only the Yorkshire Terrier and the Pug were recognized earlier, in 1885.

English Toy Spaniels want to be as close to their people as possible. They will go to great lengths to wrap themselves around their owner’s ankles, with no fear of being tread upon, for they are totally trusting.  If their owner is seated, the English Toy Spaniel will instantly seek a lap for even closer and more satisfying contact.

Both males and females average 9–10 inches at the shoulder, and range from 8-14 pounds.

The English Toy Spaniel comes in four color varieties. In the United States, each variety has a different name:

Moderate. Playing in the yard is typically plenty of exercise.

Most English Toy Spaniels coexist peacefully with other pets.

Perfect for snuggling and sitting on your lap. They are smart but can be stubborn during training… patience, consistency, and a positive, gentle approach are keys to success.

The English Toy Spaniel’s long, wavy, silky, and profuse coat needs to be brushed at least twice a week; a long-toothed metal dog comb is good for working out tangles. Left unattended, tangles and mats will develop and can cause skin problems. 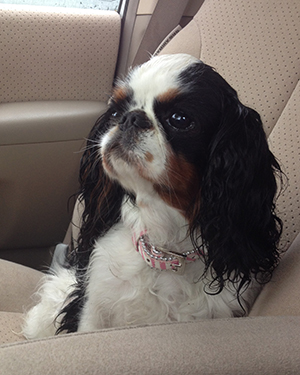 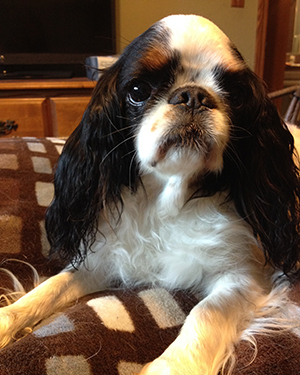 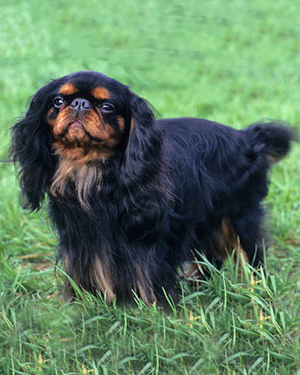