The Irish Wolfhound is the tallest of all dog breeds.  He’s confident, gentle, and kind.

Irish Wolfhounds, according to legend and history, originated in those long ago days veiled in antiquity when balladeers and story tellers were the caretakers of history and the reporters of current events. One of the earliest recorded references to Irish Wolfhounds is in Roman records dating to 391 A.D.

Often used as royal gifts, they hunted with their masters, fought beside them in battle, guarded their castles, played with their children, and lay quietly by the fire as family friends. They were fierce hunters of wolves and the oversized Irish elk; so good their prey disappeared from Ireland and the hounds fell upon hard times. By the 19th century, there were few Irish Wolfhounds left in Ireland.

At that point in history, Captain George A. Graham gathered what Irish Wolfhounds he could find and began a breeding program, working for 20 years to re-establish the Irish Wolfhound breed.

Along with its commanding presence, the Irish Wolfhound’s personality is loving, calm and curious with those it trusts. They are favored for their loyalty, affection, patience and devotion.

Despite its large size, the Wolfhound is rarely destructive in the house. They are easygoing and usually quiet, however they will sometimes announce the arrival of guests, or howl along with its pack.

Wolfhounds often create a strong bond with their family, and while not a guard dog, will protect his or her family members—rather than the house or household possessions. Although at some points in history they have been used as watchdogs, the Irish Wolfhound is usually unreliable in this role as they are often friendly toward strangers, although their size can be a natural deterrent.

That said, when protection is required, this dog will stand by your side. If they or their family are in any perceived danger, they will display a fearless nature. Author and Irish Wolfhound breeder Linda Glover believes they are acutely aware and sensitive to ill will or malicious intentions, due to their close affinity with humans, which makes them excel as a guardian rather than guard dog.

The Irish Wolfhound is not known for obedience, as they find the repetition not particularly self-serving. Wolfhounds DO aim to please however, and will respond best to training with love and firmness, never harshness or cruelty. That said, historically these dogs were required to work at great distances from their masters and think independently when hunting and this can still be seen in the breed.

The Irish Wolfhound is a slow maturing dog, both mentally and physically. They are easy to house-train, and will do best in a home that can heavily socialize the dog during its adolescence. Poorly socialized or untrained Irish Wolfhounds are incredibly difficult to handle and live with, therefore this breed must be exposed to all manner of situations very early on.

This breed requires large secure spaces to run in, but care must be taken not to over-exercise young dogs that are still growing. Do not siply open the door and allow this dog to run free. Irish Wolfhounds will follow their eyes and cannot be guaranteed to remain within one’s property and therefore require a securely fenced yard. When in an unsecured space, a harness or leash is advised.

Bred for independence, the Irish Wolfhound does not typically need to defend its space and thus often does well in a pack. A Wolfhounds is most easily described by its historical motto, “gentle when stroked, fierce when provoked.” They should not be aggressive towards other domestic dogs, but because they are born with specialized skills, it is common for Wolfhounds at play to race another dog. This is a specific hunting behavior, not a fighting or territorial domination behavior. Most Wolfhounds are very gentle with children, but can knock them over accidentally.

An Irish Wolfhound must be “of great size and commanding appearance.  He has a large, muscular greyhound-like shape; he is the tallest of dogs, not the heaviest.  His chest is deep, his neck is long and strong.

Females: The breed standard calls for a minimum height of 30 inches at the withers, and minimum weight of 105 pounds.

Males: The breed standard calls for a minimum height of 32 inches at the withers, and at least 120 pounds.

These are the minimums stated in the Standard of Excellence. Today’s hounds typically EXCEED these minimums. It is not uncommon for a mature male to stand 36” at the withers and weigh 175 pounds.

Most common color is light to dark grey brindle but colors range from light cream to black. A white patch on the chest is common as well as white tips on the toes and a white tip on the tail. Spots on any other part of the body are not allowed in the show ring.

Average is 6 years for males, and 7 for females.

Very kind to other dogs. While most can be TRAINED to live peacefully with cats and other household pets, there are many Wolfhounds with a prey drive too intense to trust with small animals.

Companionship. Hiking. Coursing and conformation competition. Some do enjoy obedience competition. They are not retrievers… they’re entirely uninterested in fetching anything.

This dog sheds, and it’s a lot of dog to shed. Their rough textured double coat with an undercoat rolls out profusely in the spring and more moderately the rest of the year. A good combing/brushing several times a week is required.

In general, an Irish Wolfhound is a robust, healthy dog that grows fast and ages rapidly. Old age, cancer, and heart disease are the major causes of death. Torsion/Bloat is also a big health consideration in the breed. 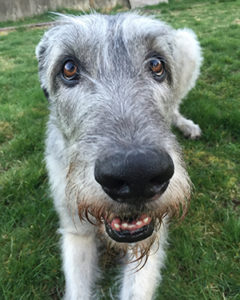 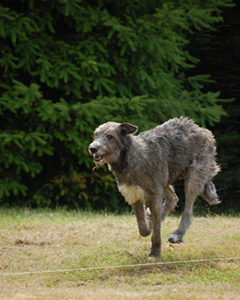 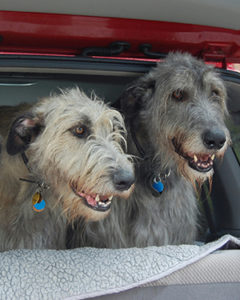 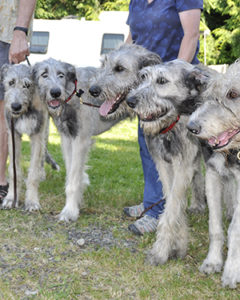 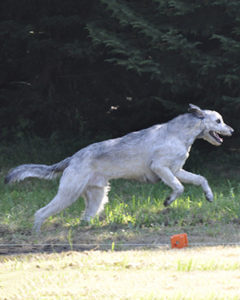 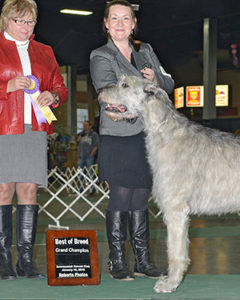